What do Montreal, Quebec and The Dalles, Oregon Have in Common?

From the article above:by Sue Frause

French-Canadian Connection: What do Montreal, Quebec and The Dalles, Oregon Have in Common?

Sign at Sunshine Mill in The Dalles, Oregon.
While going through photos of my springtime trip to The Dalles, Oregon, I picked up on a Canadian connection I hadn’t noticed before. Specifically, a French-Canadian connection. One of the many places I visited in The Dalles was The Sunshine Mill, once the home of Sunshine Biscuit Company and now headquarters of Quenett and Copa di Vino wineries. That’s when I took pictures of two directional signs that included Montreal. Really, La Belle Province (aka Quebec) in The Dalles? Turns out that The Dalles, county seat of Wasco County, is derived from the French word dalle. Here is a complete explanation from Oregon Geographic Names, 6th edition, by Lewis L. McArthur:

“The name The Dalles is derived from the French word dalle, meaning flagstone, and was applied to the narrows of the Columbia River, above the present city of The Dalles, by French-Canadian employees of the fur companies. Among other things, dalle meant a stone used to flag gutters, and the peculiar basalt formations along the narrows doubtless over flat, basaltic rocks. The first use of the name Dalles in Oregon was in 1814. The name La Grande Dalle de la Columbia became established. Although the city is officially Dalles City, the post office, and common usage is The Dalles. It has had several names since incorporation: Dalles, 1851; Wascopum, 1853; The Dalles, 1860. The Indians in the area called the area near Mill Creek, in present day The Dalles, Quenett, which was also their word for trout. Lewis and Clark camped here in 1806 and named it Rockfort Camp. Another Indian name in use was Win-quatt, signifying a place encircled by rock cliffs.”

Will it be Montreal or the Tasting Room? I’m a fan of both.
But what about Montreal and The Dalles? Several overland groups with the Astor Expedition passed by the area and explored the rapids from 1810-1812. In 1811, British fur traders of North West Company began traveling through The Dalles — the company was based in Montreal. Here are more details from the website of the Wasco County Historical Society:

“The Hudson’s Bay boatmen and the French Canadian fur traders called the greatest rapids on the Columbia River Le Grand Dalles de la Columbia. These rapids became known as the “Long Narrows” and their companion les petites dalles as the “Short Narrows.” The word dalle is French for flagstone or slab, and referred to the flat and columnar basalt rock but by the turbulent waters of the Columbia River. At the Long Narrows, the entire flow of the Columbia River was compressed through a natural basalt rock chute, thundering through a channel 200 feet deep by 200 feet wide. This torrent of water created a series of treacherous rapids.”
Fast forward to The Sunshine Mill, which milled wheat on the property for more than 130 years. Originally owned by the Sunshine Biscuit Company, the milled wheat was used in such products as the popular Cheez-It crackers. The behemoth building that housed The Sunshine Mill was the first in The Dalles to have electricity, and is the only “designated skyscraper” in the Columbia River Gorge.

Today, The Sunshine Mill is owned and operated by James and Molli Martin of The Dalles, and houses Quenett and Copa Di Vino wineries. Quenett Winery released its first vintage in 2002, and is known for its Sangiovese and Zinfandel vintages. The origin of the winery’s name also has a local connection. The word quenett was in the journals of Lewis and Clark and is an Indian word meaning “trout” or “steelhead” Fish wine? Tastes fine!

You won’t want to miss The Fort Dalles Days Rodeo, The Jammin’ July Streetfest in downtown The Dalles and all the events happening in historic The Dalles July 12th through the 20th. It’s 10 days of fun for all ages.
Ever wanted to be a cowboy? I sure did. So now I get to have a chance or at least watch them in action at Fort Dalles Days and Rodeo in The Dalles Oregon. I may not be riding a real bull but I can take a turn on a mechanical bull. Yee ha! The other folks in my group want to get a feel for early Oregon.They are going to check out the museums and tour some of the original buildings! The kids, oh they are going to have a blast. Jammin’ July Street Fest Downtown on Saturday The Dalles is loaded with fun stuff for the kids and the whole family including a good old fashion block party on Monday night!
Don’t forget the parade on Saturday the 20st.

Stay cool after all the events by taking a dip in the Celilo Inn outdoor pool and sampling a glass of our Hidden Falls white wine.

Your deserving mother won an all expenses paid one night stay at Celilo Inn with a view of the Dalles Dam and a bottle of wine to enjoy.

We cannot wait to share another milestone with your family!

Moms never stop working.
Even when they get home from their 9 to 5, they’re still taking care of everyone around them. It’s for this reason that it’s often said that being a mom is the hardest job anyone will ever do.

Have a mother who is especially deserving of a night off?

Post a comment or story telling us why your mother deserves a free night of her choosing at Celilo Inn*, sleeping in a fabulous king size bed with a view of the Gorge, and enjoying a bottle of Celilo Inn’s private label red or white wine. The best story wins!

Winner will be announced on May 12th on Mother’s Day!

* Restrictions apply. Must use before June 30th, 2013. Voucher only valid Sunday through Thursday. Valid for winner and one guest.

Planned and coordinated by the Dalles Chamber of Commerce, the Northwest Cherry Festival and the Classic Car Show aims to provide a cultural arts event that offers a forum for learning, entertainment, fun, and support of the local community.

Don’t forget to like our page so that you can stay updated on all the local happenings around here! 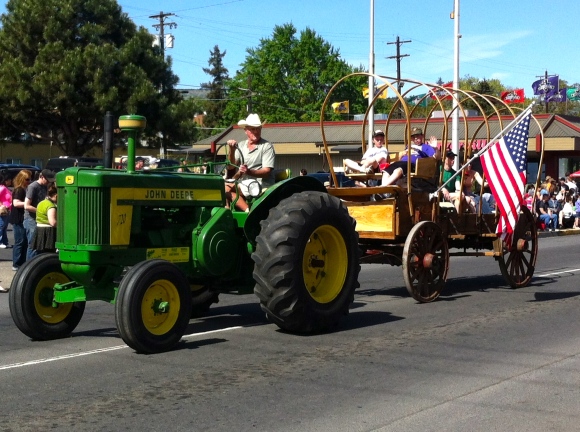 
There was plenty of action this weekend at the Northwest Cherry Festival in The Dalles, Oregon. This year’s schedule of events included the Annual Lip Sync Contest, Saturday Parade, 9th Classic Car Show, Streetfest, vendors, and live music through out the streets of downtown.

It was a beautiful day with warm weather. Far and wide in the crowds, all you could see were cherry shirts and cherry dresses. Candy was thrown out to the little kids lined up on the streets excitedly waiting to see what horse, motorcycle, wagon, tractor, or band was ’round the corner.

Live music from the band Brewer’s Grade was heard from center stage in the Civic Auditorium’s historic theater.

On Federal Street, you could see people milling about car-struck at each of the classic beauties that owners drove from miles away to show off their restored works of art. From a 1957 Chevrolet Bel Air to a 1970 Plymouth Road Runner, each car told a story of a generation–a story that no doubt some admirer would definitely relate to in the midst of the family-oriented event.

Indeed, this year’s Cherry Festival was indicative of why so many people in the area look forward to this annual staple of late April. If you didn’t make it out this year, you’ll definitely want to make it a ‘don’t-miss’ next year.

This is the event Gorge wineries look forward to all year. The Passport is your access pass to exclusive offerings and special discounts reserved for passport holders only, at over 25 Gorge wineries during this exciting 3 day event.

This exciting event encourages Passport holders to explore the incredible wonders of the Columbia Gorge Wine Region and experience our “World of Wine” by touring participating wineries, getting their Passport stamped, enjoying exclusive access to their special offers and experiencing what makes each winery unique.

Plenty of Snow for Playin’ and Stayin’ 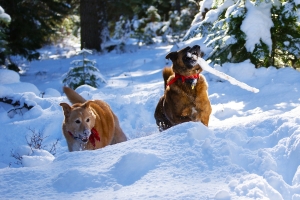 Celilo Inn is pet friendly and welcomes you to the Gorge playground of hiking trails along the Columbia River, playing in the snow in the higher elevations or enjoying a walk with your pet along the well-maintained Riverfront Trail that starts at the Gorge Discovery Center Museum and blazes past Celilo Inn's sister hotel, Comfort Inn. Visit! Play! Stay!

Celilo Inn is pet friendly and supports the good work that volunteers and employees do to help animals in need of treatment and are seeking their “home at last”. The event will be held at the historic The Dalles Civic Auditorium.

Whether you are driving I-84 or walking the Riverfront Trail, you can take in the amazing scenery of the Columbia River Gorge as magestic eagles soar the Gorge skies.